The Last of the Old School Record Dealers

I was thinking last night about this Paul Mawhinney story (see yesterday's post for the latest) and why it's hit such a nerve with me, especially given that many of my comments might sound very cold and calloused. While I don't know Mawhinney personally, I am 99% sure I know the type of person he is, and it's seeing the demise of his type that makes this story so interesting to me.

I've been collecting records since I was a kid. I could say I've been at it seriously 20+ years. Back in the late 80s, I attended my first record show. At the time, that was the primary way you bought records, other than mail order. There was no eBay, no GEMM. You had local record stores (if you lived in a hip enough town,) dealer's lists/ads in the back of Goldmine and shows.

Information was a bit harder to come by back then. There were price guides, all of which deserved to be treated with a bit of skepticism as the writers were always dealers. Other than that, you had to rely on talking to dealers and fellow collectors. You had to trust prices you'd see at shows and conversations you'd have there. You also had to learn to separate the BS from the truth, because 90% of the dealers would have you believe they had nothing but the rarest gems that they were doing you a favor to take your money for.

At the last show I attended (which was a while ago,) I remember hearing a lot of dealers crabbing about eBay. For years, these guys had been the rule makers in this game. If they told you a record was rare and worth $100, it was up to you to prove them wrong. Without the Internet, that wasn't always easy. Not only that but you didn't find a great deal of variation in price. Everyone checked everyone else's list out and there wasn't a huge deal of undercutting. Same with the shows (not to mention all the real deals happened before the doors ever opened to the public.)

When eBay came along, not only was it easy to find a dozen copies of a supposedly rare record, you could look through the completed auctions to see that the average price was a fraction of what that guy at the show wanted. You also had a kind of shopping anarchy. While reserve auctions are always an option, for the most part, people would list things and they'd see for what people were willing to pay rather than what some bearded guy with a pot belly (and they always were bearded guys with pot bellys) says it's worth.

I'm not saying that these guys were shady, but they certainly had the advantage in the days before the Internet. The rise of eBay gave people like myself a peek behind the curtain and painted a much more accurate picture of what things were really worth than the old system where the people with a vested interest in the value going up dictated the prices.

If you're still with me, you're probably wondering what this has to do with our friend and "cultural preservationist" Paul Mawhinney? Well, Mr. Mawhinney strikes me as one of the last of this dying breed of old school dealers who seems to think we're still living in pre-eBay times, the times when guys like him dictated how much this stuff is worth. I also think, in spite of attempts to paint him as some sort of protector of culture, the man cares about money first and foremost.

Now, why would I think that about this guy I've never met? Well, part of it is a hunch but, watch that video I posted yesterday. It starts with Mawhinney manhandling a record from the late 1891 (I'd really expect a collector to handle records, especially one so old, better than what we see here) and asking this camera "how can something that old not be worth a lot?" Notice how he refers to his collection as "merchandise?" 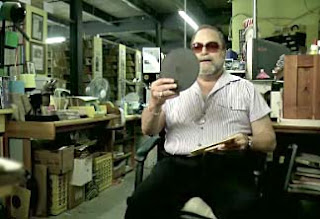 "This has gotta be worth a lot of money, right?"
Well, maybe it was before you got your oily fingerprints all over it.
And money is never far from the surface when he's discussing these records. Never once do we see anything about which record do you enjoy listening to, which one gives you the most joy, but he is quick to show us the one worth the most money. That how I remember a lot of those dealers too. The dollars always came before what was in the groove.

As for money, I'm constantly amazed that in all the commentary surrounding his story, rarely does anyone ask where his figure comes from. His "archive" has been for sale since 1993(!) according to this Pittsburgh Business Times article. Considering this collection has been pawed through many times by people who would know, I feel pretty confident in saying if the value was accurate, it would be gone by now.

I'd also like to point your attention some first hand accounts from people who have been to Record-Rama, Mawhinney's store. This thread on a collector's board and this random blog post are kind of interesting. (Back in February, I had read more posts like those, but I didn't have the foresight to bookmark them.) These stories are anecdotal and should be taken with a grain of salt, but they sound a lot more like a hard nosed dealer than an archivist collector .

A lot of people remark that some museum or library should purchase the collection. Putting aside the issue of what public institution has the kind of money Mawhinney is asking, what is a museum going to do with a couple million records? Even as a donation, this would be a huge burden on an institution just to store it and I'll bet he'd have a hard time finding someone to take it (assuming he's still insisting on keeping the whole thing together.) I don't think many libraries have records anymore and considering were talking about an all but obsolete medium, making this stuff available to the public would involve a lot of money and time.

In other words, this stuff as one huge collection is nearly worthless to anyone other than Paul Mawhinney. But that's something Mr. Mawhinney seems reluctant to see, even though he's coming up against this face to face. I think even the most stubborn dealers I used to know from the shows would have just opened the doors and had a fire sale by now. I have to wonder how much Mawhinney could have made if he'd done just that, especially had he done it closer to when he first tried to cash out, before the market really went south.

While I don't doubt that Mawhinney enjoys music, I have a hunch that he enjoys the physical record as much, if not more. There are still people like him out there, there are fewer and fewer each year and his predicament illustrates pretty clearly why. The value of most records is still tanking and who in their right mind wants to invest that much physical space to something that is just sitting around devaluing?

It's not that "nobody gives a damn," Paul. The world just doesn't see these records as being monetarily valuable as you do. If you wish your archive to be available to the world after you're gone, you have that power, but you're going to have to forget about the money. Besides, you've had potential buyers looking at this for for fifteen years, you told the Library of Congress to take a hike and eBay didn't come through. Don't you think maybe it's time to move on?
at 3:19 PM