Are You Trying to Break My Heart?

I remember when I first saw the concept drawings of what would be the Lasonic i931. Basically, it looked like someone took the million dollar idea I had right out of my head. Yeah, I thought of the whole "make an iPod dock that looks like an 80s gettoblaster" thing. That was all me. Deal with it.

Now, my idea was more like the Conion C-100F, which is kind of the quintessential 'box. Quick, picture a boom box. I'll bet you have a mental image of the Conion. Gaudy, a little chintzy, but loud and slightly better sound than you might expect.

I wasn't shocked Lasonic would be the ones to run with this. They'd produced a legit getto classic with the TRC-931 and apparently had reissued it (slightly updated) a few years ago. The TRC-931 had that iconic look and sound, so if someone was going to make an iPod boom box, this is a pretty good place to start. 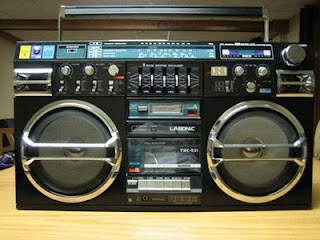 Their iPod version, cleverly called the i931, was announced ages ago with a cheesy looking render that just screamed vaporware. Truth be told, I kinda put it out of my mind as I assumed this would never see market. So, imagine my shock when I'm in Fry's today and there it is, the Lasonic i931 in the flesh! 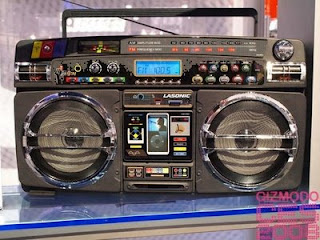 That shock quickly turned to disappointment when I actually started tinkering with the thing. First off, though it's been ages since I last saw a TRC-931, I'm pretty sure that while it tipped it's hand as a cheap piece of gear, it didn't feel like it would fall apart in your hands. The i931 does. While the original was quite a hulking slab of plastic, this new one feels like it was made from recycled soda bottles. I'm pretty sure the TRCs could take a bit of a beating while the i931 feels like a slight drop would crack it in half.

Plus it's kinda rounded. Gettoblasters are supposed to be boxy and squared off, not aerodynamic. What is up with that? 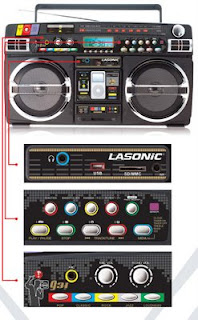 Next, the details are all wrong. While they put in a fake analog tuner scale, the actual radio tuning is digital. The original's five band EQ has been traded for five EQ presets. The buttons all feel cheap, and there's a ton of them. The simplicity of the original has given way to the confusing menus of the remake.

And speaking of, the display is pretty crummy, as I'm sure you've guessed. It looks like a knockoff Indiglo watch and I'm sure would be unreadable in direct sunlight. The USB and card readers are a nice touch, but between the display and the menus, I couldn't imagine trying to play music off a card or thumb drive.

So, what about the sound? Pretty crappy. Like a $30 iPod dock, but louder. To be fair, I had problems tuning in a radio station, which probably says more about the cavernous Fry's than the Lasonic, and I didn't have my iPod with me. My wife handed me her iPhone, which was a bit too tall to fit in the dock, but I was able to play a bit of LL Cool J. I couldn't manage to make this 'box sound anything but cheap.

And speaking of, it isn't exactly cheap. Fry's wants a cool $200 for the i931. I think list is $219, but I've seen anywhere between $159-$230. The lower end of that is closer to the end where I'd say if you're really really in love with the idea of an old school getto blaster iPod dock, you might consider it, but even then, I think you're going to feel like you overpaid.
at 12:17 AM