It's been a drum buying couple of weeks for me, much to my ever patient wife's bemusement. First, I got an electronic kit which I'll detail more when everything is working correctly (grr...) then I bought two more acoustic kits. Deals just seem to be dropping from the sky for me.

So it's the first acoustic kit I want to talk about right now.

I'd been thinking about changing up my sound for a while. See I play an old round badge Gretsch kit, which I love. I've had it about ten years and I honestly thought it was the last set of drums I was ever going to buy.

If you know anything about drums, you know those drums have a beautiful warm tone that just sings. The record beautifully and when you're playing them, they just sound great.

The problem is, I play in a loud guitar rock band (Svetlana) and while those drums sound fantastic on our recordings, they kind of get lost live. Part of the reason Gretsch never successfully made the transition to the rock era was that their drums just don't have the oomph to cut through loud amps.

Specifically, the 20" bass just isn't cutting it. Yeah, I could play around with different heads and tuning, but frankly that would rune the tone that was the whole reason I bought the kit in the first place.

After I bought the Gretsch kit, I bought a second kit to knock around. It was an old Fibes Crystalite acrylic kit. These drums were in pretty sad shape when I got them, but I fixed them up pretty nicely and, to my surprise, I really liked the way they sounded.

The big difference between those sets was the shells. Whereas the Gretsch are some magical mixture of maple and "other select hardwoods", the Fibes were acrylic. In addition to being transparent (which is a really cool look on stage) the drums were loud, cutting and very neutral sounding. Pretty much everything my Gretsch drums weren't.

I ended up selling the Fibes to my friend Jon because, at the time, I wasn't playing them and I had no where to store them. They were living at his studio anyway, so it only made sense that he owned them.

Fast forward 5 or 6 years and here I am. For some reason I've got acrylic drums on the mind again as I'd already owned a set and knew they'd solve my issues. Plus, they are really fun to play as they look so cool.

Specifically, I was thinking about Ludwig Vistalites. When I was growing up, these were the drums I wanted because John Bonham played a kit. Ever seen Song Remains the Same? Yeah, that's what I'm talking about. 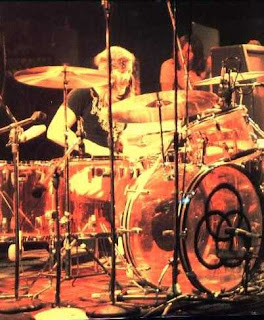 Ludwig reissued those specific drums a few years ago, along with some smaller kits, but the fact of the matter is, I wasn't looking to spend that kind of money. And, as much as I'd love the Bonham kit, I really don't want to transport a 26" bass drum. (I once had a 24" prior to the Gretsch and when I sold my Chevy Malibu for a Camry I couldn't fit it in the car!)

Anyway, I'm up at Guitar Center looking for heads and what do I see back around by the used kits? 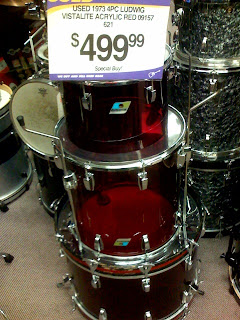 I check them out (not as well as I thought, more on that later) and sleep on it. $500 seems fair as they're not in bad shape. Even though I just bought an electronic kit, I didn't spring for the top of the line V-drums kit I was eying, so I'm still $3000 under my original budget. Now, I'd done a lot of work with the Fibes set I'd owned prior, so I know how to get these things looking great. See, the acrylics are notorious for scratching and cracking. Scratches aren't a terrible thing, unless they are gouges. Some Novus Plastic polish and elbow grease and you're good to go.

Cracks are a drag though. They don't affect the sound really, my Fibes kit with it's multiple cracks (and ham fisted repair jobs) was a testament to that. But, they can get worse and they do mar visuals of the drums a bit.

Well, I thought I was in the clear until I got home and checked the floor tom again. Ok, it's not a deal breaker, but it is a disappointment. Still, a little time with Weld-On 3 and I fell pretty confident it's not going anywhere.

So, about a week later and here's what they look like: Here's what I did to this kit:

Stripped the drums. Polished all the chrome with Brasso. Polished the shells with Novus 1,2,3 (three step process). RIMS mounted the toms and replaced the godawful 70s Ludwig mounts and holder with modern stuff. New heads.

One thing about this kit that's kind of odd, those mounted toms are single head. The floor tom is double. I can't find this configuration in any of the catalogs. At first I thought it was pieced together, but the serial numbers are all very close. Then I considered it could be a Quadra Plus kit missing two toms, but the toms have regular Ludwig tom mounts rather than the clip style they used on that kit. It's possible this could have been a custom order or who knows what the story is?

Now to get really drum geeky, I went with Evans heads on the drums. I used those on the old Fibes and they sounded great. All the toms have G2 two ply heads which gives just a little dampening but still sounds fairly open.

Can I tell you how much I miss the Gretsch die cast hoops though? Geez, I forgotten how hard tuning drums is with regular triple flanged hoops. Heh.

I also used a G2 on the resonant side of the bass, which seems weird, but works perfectly with th EQ4 I have on the batter. I don't feel I need any extra dampening on the bass because of this head combo.

Of course, I've only played this by myself in the basement, so we'll see what it sounds like on stage with the band. Still, I really like what I'm hearing so far. And if I decide I don't like the sound of those single head toms, well, let's just say I have options I'll discuss in a later blog post. (No, it's not drilling new lugs. I'm opposed to adding holes to drums.)